THE DAWN OF DEFYENEURS - THE POSTER 2012 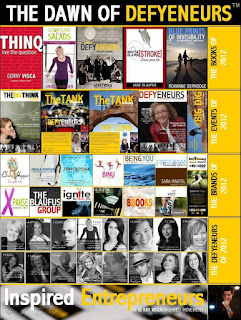 The Year 2012 celebrates the DAWN of DEFYENEURS.  This year, I launched 2 official books: THINQ - Live the Question and the first official DEFYENEURS Book: Season 1.  I had the pleasure of collaborating with DEFYENEURS on the launch of their books: Significant Sexy Salads with Angela Kontgen, With the Stroke of a Pen, Claim your Life - Jane Blaufus and The Blueprints of Invisibility with Roxanne Derhodge.  In 2012 we launched 12 inspired TANKS, a BIG THINK YOUTH Event and expanded Thursday TANKS into Edmonton, AL and Niagara Falls, ON.  We launched a success event series called Energy Infusions with Angela Kontgen and a BIG DIG Event series with Erika Caspersen.  In 2012 we launched the official DEFYENEURS MAG and released 2 editions.

In 2012, we ignited over 15 inspired brands with DEFYENEURS and ignited close to 25 DEFYENEURS.  Congratulations to all that have stepped into their life and made 2012 a memorable year to remember.  Thank you to all that have been a part of this inspired movement of entrepreneurs.
Posted by Unknown at 12:39 PM No comments:

$25/person: Includes a signed book PLUS our new DEFYENEURS™ MAG Jan 2013 Edition.
Reserve your seat by Jan.10 be emailing: gerry@redchairbranding.com


It’s here, the first DEFYENEURS™ Book: Season 1.  Please join ’s Creative Coach®, Gerry Visca, Angela Kontgen and the contributing authors of Season 1, for our official book launch on Thursday Jan. 24,2013.  This explosive evening is fueled with inspired presentations, cocktails and paparazzi!  Kick start the New Year with a dose of inspiration, a signed copy of Season 1 and our new 2013 Magazine. This launch party is limited to 100 individuals so book your hot seat today. 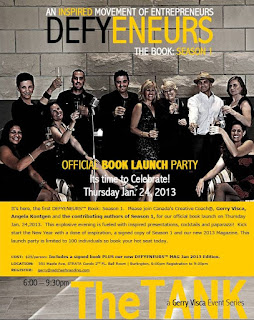 Posted by Unknown at 4:22 PM No comments:

All of us are born with dreams, a vision and goals for our lives.  It’s one thing to merely let them exist as thoughts, but it’s quite another to take action and bring them into being. Upon leaving the field of architecture in 1999, Gerry Visca, now regarded internationally as ’s Creative Coach™, has been on a quest to inspire 1 million people world-wide to action.  With the release of his recent inspirational movement; DEFYENEURS™, an inspired breed of entrepreneurs, Gerry Visca is confident that his life purpose is coming to fruition.

“I was compelled to write the foreword in DEFYENEURS™ Season 1 because, like Gerry, I’m drawn to big dreamers who also have the ability and the commitment to make their visions a reality.  Gerry Visca’s vision is becoming reality.   Since we first met, he’s travelled to over ten countries, delivered hundreds of talks, impacted thousands of people, and published six books. Gerry Visca personifies his DEFYENEUR™ movement as the spark and the catalyst for others to entrepreneurial success.  He’s started a movement that is flourishing and with this latest DEFYENEURS™ venture, he’s casting his rock star spotlight on those individuals he sees have value to share with others.  On to those who can tell the tale of their journey to defy gravity and inspire others.  In this way, Gerry’s message moves from one to one, to one to many.” said Theresa Beenken, CEO of National Speakers Bureau.

“Have you ever questioned your life purpose and your destiny? Do you feel there is a bigger picture of your life that you are stalling on?” These are the kinds of questions that Gerry Visca asks all DEFYENEURS™ just before they extract and define their ‘WHY’ and impact themselves and the world around them.  As part of this inspired movement, Visca has launched the first DEFYENEURS™ Book, Season 1 with eleven other contributing authors.  Season 1 is scheduled for official release on January 24th, 2013 at the Season 1 launch party in .  “There are a few collaborative books out in the world but none, I believe, have such a passion and commitment to inspire others to action!” said Visca.

“These contributing authors are ordinary people doing extraordinary things and I am committed to celebrating them as part of this inspired movement” said Gerry Visca, author of six books and one of ’s top inspirational speakers. “I am focused on inspiring a creative movement that celebrates an inspired breed of entrepreneurs that are defying gravity in their everyday lives.  Many of these DEFYENEURS™ are becoming best-selling authors, coaches, teachers, and speakers with a crystal clear purpose as to why they exist in the world”.
The following is a list of the contributing authors in Season 1:
Gerry Visca, ’s Creative Coach, Founder of DEFYENEURS™
PJ Mercanti, CEO of The Carmen’s Group in 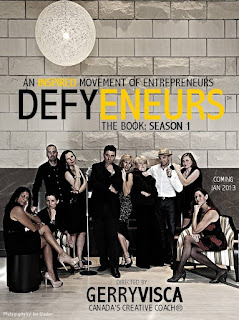 Angela Kontgen, contributing author and editor of DEFYENEURS™ Season 1 notes: “The dictionary definition of an entrepreneur is ‘an enterprising individual who builds capital through risk and/or initiative’ – not really all that compelling, I think.  Make way for the age of the ‘DEFYENEUR™’ – an individual inspired and/or ignited with a compelling purpose and a massive clarity about ‘why’ they exist.  These individuals create a movement.  These individuals defy gravity to make a difference in the world and bring their ‘why’ into existence.”

The ambitious goal that Gerry Visca declared in 2008 of creatively inspiring 1 million people to action is being taken to new levels with the DEFYENEUR™ movement.  “There are few as deeply committed to surrounding people with such an incredible energy as they do the work, take the risks, and defy gravity to bring their dreams to life” notes Angela Kontgen, regarded as Canada’s Energy Coach “This movement is rapidly expanding nationally with stellar people that want to make a difference in this lifetime” said Gerry Visca. “They want to uncover their full potential and live their best lives now by inspiring others around them”.
For more information on the DEFYENEURS™ movement or to interview the list of contributing authors in Season 1, contact:
Gerry Visca at 905.528.6032 gerry@redchairbranding.com 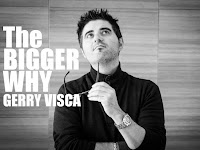